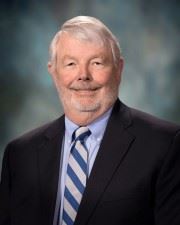 Chuck grew up in Houston, Texas, and graduated from Rice University in 1967. After serving in the U.S. Air Force for four and a half years, he returned to the University of Texas at Austin, graduating with a law degree in 1975. He spent most of his career in corporate legal departments of public oil and gas companies.

This work brought Chuck and spouse, Kendra, to the Grand Valley in 2007. They were immediately impressed by the friendly people, open space, access to the outdoors, and livability of the area. Soon after relocating, they decided that Grand Junction was home.

In their free time, Kendra and Chuck enjoy being outdoors and hiking with their dogs at Lunch Loop and other locations around our area. They are active in church and arts communities and are grateful for the company of the many friends they have made here.