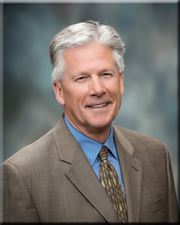 J. Merrick "Rick" Taggart moved to Grand Junction in the early 1980s to lead and manage Marmot Mountain Works, a young dynamic outdoor company, as its chief executive officer (CEO), Chairman and Co-Owner. After selling the business in the late 1980s, Rick went on to lead divisions of The Timberland Company as their Senior Vice President and then on to be the CEO of Swiss Army Brands until 2010. In recent years Rick has worked at Colorado Mesa University as a senior manager and a teacher of business strategy, management and marketing.

As an avid outdoorsman Rick fell in love with this area and while his corporate career took him away from the Valley at times, he and his wife Deanna have made Grand Junction their home for over 30 years. Deanna and Rick have four children, three of them residing in the Grand Valley.

Rick received a B.S. in Management Science at Syracuse University and an MBA from the University of Phoenix.

He has served on numerous boards in the area including the Grand Junction Economic Partnership, Saint Mary's Regional Hospital Foundation, the Suicide Prevention Coalition of Western Colorado and the Grand Junction Business Incubator.

Rick is honored to serve this community and is focused on diversifying and growing our economy.